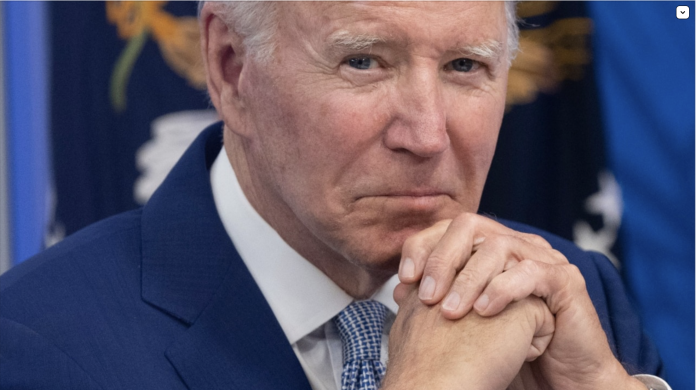 The Biden White House released a statement redefining what constitutes a recession ahead of an expected GDP report showing a continued decline in the economy for the second quarter.

A recession has generally been defined as a period of negative economic growth for two consecutive quarters.

“While some maintain that two consecutive quarters of falling real GDP constitute a recession, that is neither the official definition nor the way economists evaluate the state of the business cycle,” the White House Council of Economic Advisers wrote in a blog post last week.

Bracing for impact: Even if Thursday's GDP report shows a second consecutive quarter of negative growth, you won't hear the Biden admin using the R-word.

The Council of Economic Advisers is redefining what a recession is…🤔https://t.co/HHBYJKqP5V pic.twitter.com/gecR93vPPj

“Instead, both official determinations of recessions and economists’ assessment of economic activity are based on a holistic look at the data—including the labor market, consumer and business spending, industrial production, and incomes,” the WH release claimed. “Based on these data, it is unlikely that the decline in GDP in the first quarter of this year—even if followed by another GDP decline in the second quarter—indicates a recession.”

Likewise, Joe Biden’s Treasury Secretary Janet Yellen tried getting ahead of the expected bleak economic numbers over the weekend.

“We’ve got a very strong labor market. This is not an economy that’s in recession,” Yellen said on NBC’s “Meet The Press.”

.@SecYellen: Two negative quarters of economic growth "is not the technical definition" of a recession pic.twitter.com/oR5Ael4yyd

Yellen then insisted there’s “no sign” of a coming recession despite record-high inflation and ominous data from a number of economic indicators.

“You don’t see any of the signs. Now, a recession is a broad-based contraction that affects many sectors of the economy. We just don’t have that,” Yellen said.

One Twitter user pointedly noted that the Biden administration’s effort to change the definition of recession just before bleak GDP numbers are released is “Soviet-level propaganda.”

“The Biden Administration is redefining ‘recession’ in an effort to avoid political backlash. It’s not a recession if you change the definition of recession. Soviet-level propaganda from a soviet-level regime.”

The Biden Administration is redefining “recession” in an effort to avoid political backlash.

It’s not a recession if you change the definition of recession.

The Commerce Department will release second-quarter GDP data on Thursday.

Economist Peter Schiff said Friday that once two consecutive quarters of GDP growth are in negative territory, it will be much more difficult for the media and White House to spin a rosy outlook about the economy.

When we end up with an even weaker number for the second quarter, that really throws a bunch of cold water in the face of the idea that we have a strong economy. And given how weak the Q3 data already is… We don’t have a lot of July data yet, but it’s starting to come in and what we’ve seen is pretty ugly. And it makes a lot of sense that the third quarter would be even weaker than the first two because interest rates are going to be a lot higher in the third quarter than they were back then. Next week, the Fed is set to raise interest rates 75 basis points. We’re going to be up to 2.25 to 2.5%. If we were in recession when interest rates were 0.5%, 1%, 1.5%, think about how much worse that recession is going to be when interest rates are higher.”

Given that now the White House and media are changing economic definitions to suit their political needs, it probably won’t be long until they start changing the definition of “inflation,” too.

Live shot of the media this week trying to change the definition of the word "recession". pic.twitter.com/qUzDXcCjlY

Help us stay in the fight with a monthly subscription on SubscribeStar https://www.subscribestar.com/launch-liberty

Launch Liberty 2022 State of The Union Address: The Political Mirage

Reach out for interview requests, article submissions, and general inquiries at my email troy@launchliberty.com

© 2021 tagDiv. All Rights Reserved. Made with Newspaper Theme.