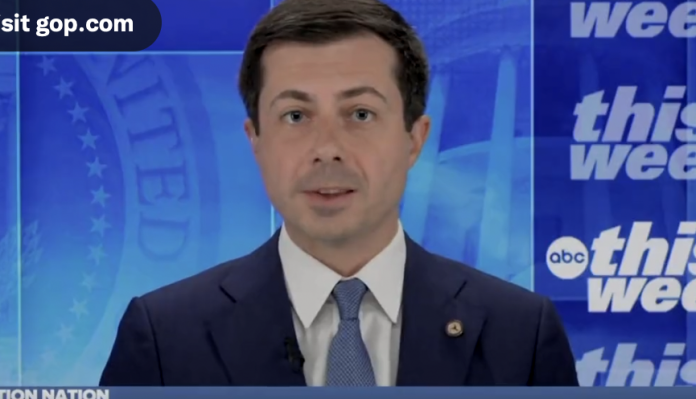 In an interview with ABC News Sunday, Joe Biden’s Transportation Secretary Pete Buttigieg claimed that it is incorrect to say that Biden’s actions haven’t helped stave off gas prices rises.

During a conversation about rampant inflation, Buttigieg told George Stephanopoulos “I don’t think it’s correct to say [Biden’s action] hasn’t made any difference at all” on gas prices, despite the fact that Biden himself admitted this months ago.

Buttigieg further claimed that Biden tapping the strategic petroleum reserve helped to “Stabilise global oil prices,” and that the price of gas is not “set by a dial in the Oval Office.”

Transportation Secretary Pete Buttigieg: “I don’t think it’s correct to say [Biden’s action] hasn’t made any difference at all” on gas prices.

On Friday, Fox host Tucker Carlson noted that “The price of diesel is now hit its highest price ever recorded in history. The national average is up 70% since just last year. It’s now $5.53 a gallon.”

Carlson noted that “Diesel fuel is what makes transportation possible in this country,” and as such should be Buttigieg’s primary concern.

“So, what is the transportation secretary, Pete Buttigieg, doing about this? Working feverishly to fix it? No.” Carlson explained, adding “Working feverishly on the equity agenda, their only concern. So, vaccine mandates sent the airlines into turmoil without saving a single life. Now, the administration is demanding that airlines hire fewer White pilots and fewer White air traffic controllers, because that was the real problem, because skin color somehow is related to aeronautical skill. And airlines are doing it. United has announced that 50% of its company’s pilots will be ‘women or people of color’ over the next decade.”

Carlson also pointed out that “in November, [Buttigieg] told Americans in rural areas, the poorest parts of this country, to go ahead and buy electric vehicles. Get a Prius even though they cost more than 50 grand.”

“In that same month, of course, he reminded us that our highways are racist.” Carlson continued, referring to Joe Biden’s $2.5 trillion infrastructure spending spree which included $20 billion earmarked for actually destroying highways because they have been deemed to be racist.

Black and brown neighborhoods have been disproportionately divided by highway projects or left isolated by the lack of adequate transit and transportation resources.

In the Biden-Harris administration, we will make righting these wrongs an imperative.

Carlson also noted that Buttigieg has spent time recently “lecturing you about abortion, a topic that doesn’t really have anything to do with him on any level.”

“Even as our transportation systems are falling apart, and that’s not an overstatement, he’s busy going to policy conferences, telling you the real problem in this country is the Supreme Court ruling on abortion,” Carlson reiterated.

“Pete Buttigieg is a disgrace. He’s not even doing the bare minimum to fulfill his job requirements. Pete Buttigieg should resign, at least,” the host concluded.

Help us stay in the fight with a monthly subscription on SubscribeStar https://www.subscribestar.com/launch-liberty

CHECK OUT THE LATEST EPISODE OF THE TROY SMITH SHOW FEATURING AN INTERVIEW WITH REPUBLICAN NOMINEE FOR BALTIMORE COUNTY SHERIFF ANDY KUHL!

AUDIO: Hunter Biden Says Joe Biden Is Politically Influenced by ‘Anything That I Want’

WATCH: White House Tells Americans They Have It Better Than Europeans On Record High Gas Prices

BREAKING: Stacey Abrams Financed And Controlled Staffing For 2020 Election In...